The school has an event called "Grandparent's Tea", where the grandparents (or substitute friend) comes after school, has cookies and tea with the kids, tours the classrooms/school, and then can take them to the Scholastic Book Fair.  (gotta think this is a brilliant idea to sell more at the book fair).

Since Zora is in half-day kindergarten, I had to bring her back to school to participate, and had them waiting in the building so it eliminated the possibility of them running across the road to greet my folks and not paying attention to traffic.

So, here they wait. 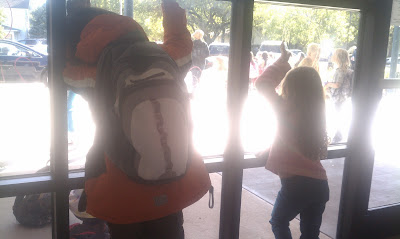 Once I saw Mom and Dad crossing the street, I let them go outside for greeting hugs.  Everybody was excited.  I was concerned about Zane handling the event because it was really crowded, loud, and chaotic.  (it was the first time they had run this event and I don't think they anticipated the level of crowd).  I actually trailed them for a bit to make sure Zane looked OK before heading home and waiting for them.

As it turns out Zane did fabulous.  Both did.  They each got books from Grandma and Grandpa, and had a lot of fun showing them around.  We met up with them after the event at the Subway restaurant, which Zane had been asking for the last few weeks/months (he loves the meatball subs there), and we had a nice conclusion to the afternoon's events.

It was a Wednesday, and not long after returning home it was time to leave for Wednesday Night Church, and Zora, as usual, popped right up ready go, but Zane got agitated.  When we told him it was time to go he desperately yelled "NO MORE PEOPLE!"  He was DONE with crowds and people.  He did such a great job at the event, and after seeing the crowd that amazed me (he would not have been able to handle that even a short time ago), so when he said he was done, we told him that was fine. We also told him that we were happy he used his words to explain why he was upset instead of just losing it.  That, in itself, deserved to be respected.  So, Zora went to church, Zane stayed home and unwound away from the people.